… is all that matters here!

This weekend has been very eventful!

As last time I was fortunate enough to be able to share Sandra Price’s studio which is in her home on the main tourist route from Glasshouse Township to Beerwah.  It was a very pleasant weekend and we actually spent Saturday making conversation more than making art as it has been such a long time since we saw each other.  But it was very rewarding as conversation flowed with cups of tea and a tad too much chocolate…

I managed to complete my rose as a brooch by stitching the clasp onto the back, so it is now more than a pretty felt flower, but can be worn as well.

Sunday was more productive for both of us. Sandra worked on her elephant painting which was a development fascinating to watch as she brought beautiful Mma Tembo to life using a monchrome palette.  I am eager to see it finished.

While Sandy painted, I felted.  Because I was feeling quite tired this weekend, I couldn’t face a large project that would require lots of physical work, so I made two smaller pieces.

The first was a little country scene that I was going to use as an insert for one of those pre-made cards that has a frame cut into the front so you can put a painting behind.  I went a bit made with the wool layout though and the whole painting turned out too large for the card.  As luck would have it, Sandy happened to have the perfectly sized embroidery hoop which she suggested as a frame, so I attached the ‘painting’ to some cotton fabric and stretched it into the hoop.  Some of the corners sit just over the edge of the hoop but I rather like the effect.

I’m actually pleasantly surprised at how this turned out.  Sandra really liked it too.  I will definitely make more of these.

The other smallish project I gave myself was covering the second of two tall slender glass vases I bought the other day.  If you read my recent post, you’ll have seen the first one which I covered in cream/orange.

This time I wanted to experiment with a completely different look.  I went for a covering in totally different colours, and laid in such a way that a lot of the glass would show through.

I chose dark blue, turquoise, lime green and cream as my palette.

I also used blobs of silk noile for details, and some ever gorgeous and lustrous silk tops.

The resist for this pattern was the same as for the last vase, as I knew it would give me a perfect fit.

I’ve never made anything 3D that is open weave before, so this was guess work, but I’ve got a couple of pics of the layout front and back, that I’ll show you.

As you can see, I’ve arranged the wool in such a way that it snakes up the vase.  I had no idea if this would work, or if it would end up all crumpled down the bottom of the vase like some old woman’s stocking, but I couldn’t resist giving it a go!

Here are the layouts, front and back:

As you can see, I made the base fairly solid, and also had a rim at the top, with the rest of the wool winding around the resist.  I varied the pattern using silk noile and silk tops.

As it wasn’t a large piece, it didn’t take a lot of work, but I was glad that it shrank to a size that it perfectly fits the vase.

Here is the finished result:

Two glass vases with the different styles of felted covering

So while I made only two small pieces over the weekend, both were new territory for me, and it’s always good to stretch your creative boundaries! 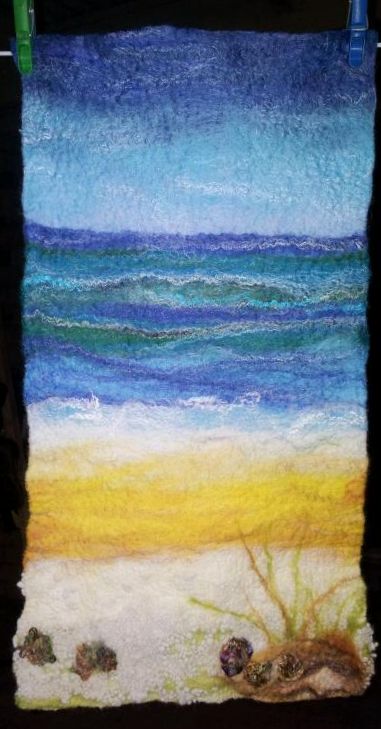 Photos of my art work

Writings and Musings on Boat Life

Reflections, revelations and proposals esoteric: Themes to elucidate the depths of human potential.

BeautyBeyondBones
Open the Door to Your Inner World

A Journal of Observations

Life in West Marin seen through the eye of a needle

My dabbling and exploration in contact printing, natural dyeing, and soap making

I make therefore I am.

my move to countryside and planning a crafts business

little house in a field

The Blog of Knitted Fog